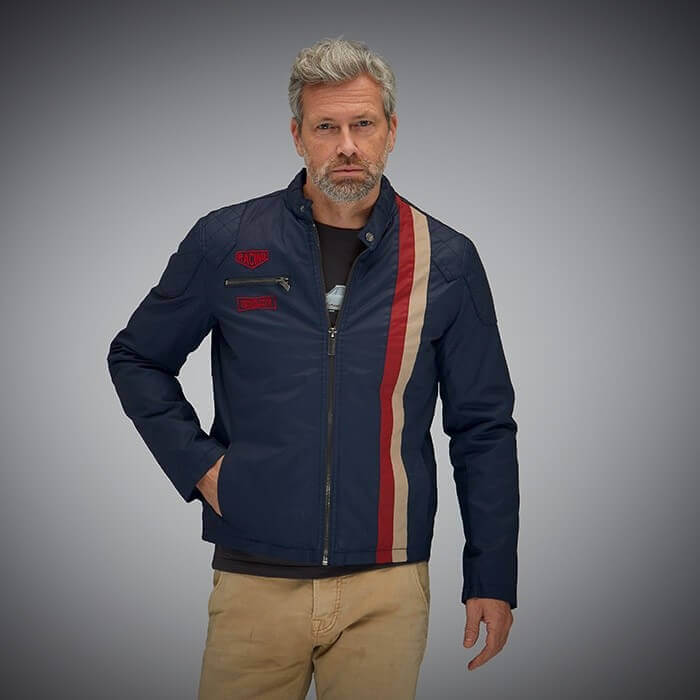 Jacket of the brand GrandPrix Originals Racing navy blue. A car jacket from a collection of the German brand paying tribute to the car clothes worn during races like the 24 Hours of Le Mans. Indeed the jacket remains on a racing theme with the presence of two colored stripes red and beige and two embroidered patches. A "Racing" patch and a "GrandPrix Originals" patch. The jacket is made of Streetex and the quilted lining is 100% polyester. The jacket has two outside side pockets without zippers and two inside pockets with button closures.

Did Steve McQueen race the 24 Hours of Le Mans?

In preparation for the film "Le Mans", in which the American actor Steve McQueen starred, he had to race the 12 Hours of Sebring in March 1970 and even managed to finish second. He wanted to race the 24 Hours of Le Mans with Jackie Stewart as a teammate. However, he was forced to face the refusal of the insurance companies which led him to do the 24 Hours of Le Mans only as an extra in the pits to shoot some fittings.

To pay tribute to the outfits worn by Steve McQueen in the film "Le Mans", the brand GrandPrix Originals has released this collection of jackets and blousons inspired by the style of the driver. In this collection we always find the "racing" patches that replace the "Heuer" sponsors as well as the emblematic racing stripes that often take up the historic bright colors in the automotive world. The particularity of this navy blue jacket is the sobriety while remaining in this "racing" theme. Indeed, the navy blue gives it elegance and class. Especially accompanied by its quilted aspect and its material that can be compared to a leather, or a cotton oiled type "Barbour" which gives a certain cachet to this automotive clothing. It is a jacket that you can wear on all occasions, whether it is during a car meeting, or during a simple ride at the wheel of your classic car. This jacket is made by enthusiasts for enthusiasts.