SEE THE VIDEO PRESENTATION OF THE PRODUCT

Driver's Club red polo shirt "917 023". The Driver's Club brand has a habit of releasing collections of products each with a story. Like many car clothing brands, each collection has a story. This is the case of this red polo "917 023". A polo designed in 100% cotton, which is a guarantee of quality. A "Driver's Club" brand logo is embroidered on the left chest, accompanied by a number 23 flocked on the right chest. Two flags are flocked on the sleeves, a German flag and a Union Jack flag. The numbers 917 023 are embroidered on the back of the shirt.

The Porsche 917 023 appeared in 1969 and was part of the 65 Porsche homologated during the period from 1969 to 1971. This 91 model is certainly one of the most emblematic of the 1970s. It is thanks to the pilot David Piper and his courage that it could be developed. It is this famous 917 023 that gave Porsche its first victory at Le Mans in 1970, a victory that was the beginning of the Porsche era on the grounds of the Sarthe. And this thanks to the drivers Richard Attwood and Hans Herrmann, confirmed Porsche drivers.

It is to pay tribute to this iconic car that the brand Driver's Club decided to market this red Polo 917 023. A garment that holds some details that each have a story. Indeed, the number 23 flocked on the right is the number present on the livery during the victory at Le Mans in 1970. Moreover the two flags represent the nationalities of the drivers Hans Hermann the German and the Anglo-Saxon Richard Attwood. The color of this polo shirt, a flaming red that was worn by the livery of this Porsche 917 023 during the victory at Le Mans in 1970. To finish the name of the car is embroidered on the back to complete this historical work that is this polo. A polo shirt made by an enthusiast for enthusiasts of automotive history! A tribute to the Porsche 917-023, the winning car of the 24 Hours of Le Mans in 1970, driven by Hans Herrmann and Richard Attwood. 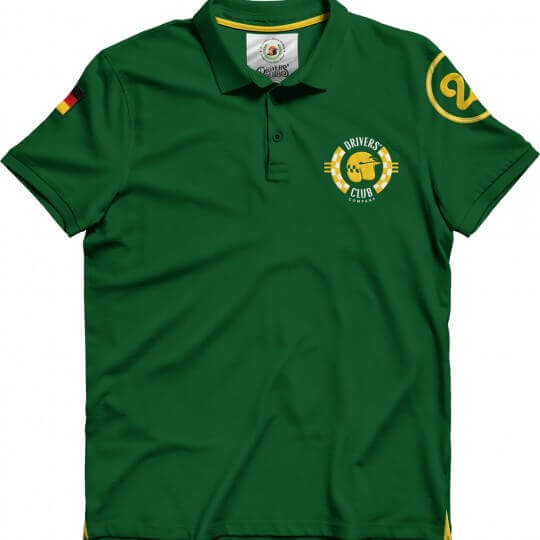 men-s-polo-shirts
POLO DRIVERS CLUB -...
54.08
A TRIBUTE TO THE AUTOMOBILE: Drivers Club Company celebrates the great names of the automotive world with a sleek line of clothing designed to match the style of Gentlemen Drivers. ...

men-s-polo-shirts
POLO DRIVERS CLUB -...
54.08
A TRIBUTE TO THE AUTOMOBILE: Drivers Club Company celebrates the great names of the automotive world with a sleek line of clothing designed to match the style of Gentlemen Drivers. <table...