Jacket of the brand GrandPrix Originals Gulf Roadmaster Steve McQueen sky blue color. It is a car jacket that carries the colors of the German oil company known in the world of the car "Gulf " with a sky blue color and racing stripes navy blue and orange that come to give a side sport car to the jacket. The jacket is made of 100% cotton and the lining is 100% polyester. It has a patch pocket on the right chest, two outside pockets with zippers and three inside pockets, one of which is a small business card pocket.

Which jacket did Steve McQueen wear in the movie "Le Mans"?

The most emblematic film of the automobile world is of course " Le Mans ". The film was released in 1971 and directed by Lee H. Katzin, in which the actor who will be known worldwide thanks to this film plays : Steve McQueen. In this film, the actor plays the role of a driver who is going to race the 24 Hours of Le Mans. This driver wears an outfit that has the particularity that it will make the brand "Gulf" known worldwide. Indeed, this sky blue outfit with two racing stripes with the Heuer logo has the particularity of having the logo of the American oil company embroidered on the left chest. It is thanks to the cinematographic success of this film that this brand is going to impose itself, to be recognized in the world and especially in the automobile universe.

It is from this pilot's outfit that the brand GrandPrix Originals was inspired to develop this light blue Gulf Roadmaster jacket. Indeed, the German brand has taken all the codes to remake a version of this outfit in the form of a jacket. Indeed they redesigned the jacket by keeping the same color code while giving it a modern look. The objective of this jacket is to pay tribute to the film and to allow enthusiasts to wear a jacket of car driver as realistic as possible. Indeed this jacket has elegant and high quality finish referring to the world of the automobile. We can take the example of the zipper which is an accelerator pedal. Great nod from the German brand to the world of motorsport. It is a light jacket that will be able to accommodate many occasions that present themselves to a car enthusiast. Like a car show, a rally or simply a ride at the wheel of a sporty car. 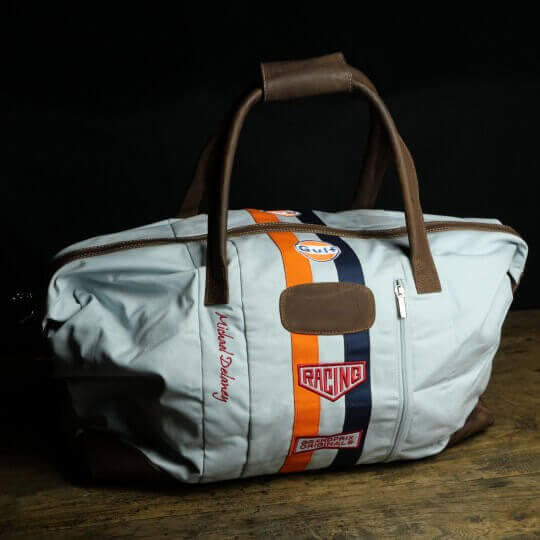